THE HYDROS ARE COMING TO TRI-CITIES! 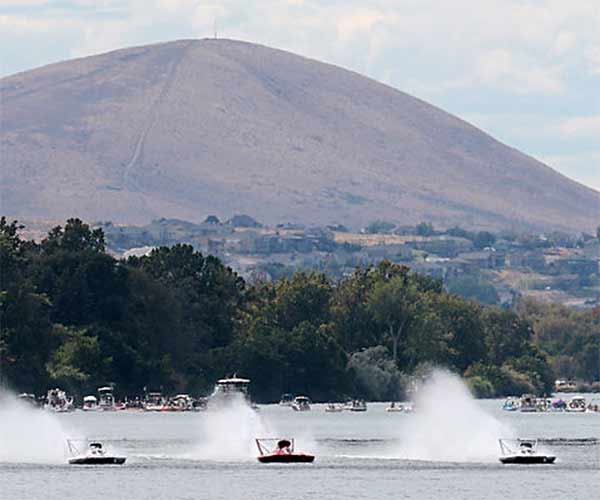 SEATTLE (May 14, 2019) — Five H1 Unlimited Hydroplane Racing Series race teams are scheduled to hit the water in the Tri-Cities, Wash., on Friday, May 31, to prepare for the season opener at the second annual Southern Cup on Lake Guntersville, Ala., on June 28-30. A temporary river course representing the 2 1/2-mile racecourse will be available for H1 Unlimited hydroplane testing at 9 a.m. The course is scheduled to be open until 5 p.m. The event is free to the public at Columbia Park in Kennewick, Wash.

The teams confirmed to participate include the U-1 Delta/RealTrac—Jones Racing, driven by Andrew Tate of Walled Lake, Mich.; the U-6 Miss HomeStreet, driven by Jimmy Shane of Maple Valley, Wash.; the U-11 J&D’s presented by Reliable Diamond Tool, driven by Tom Thompson of Cambridge, Md.; the U-12 Graham Trucking, driven by J. Michael Kelly of Bonney Lake, Wash.; and the U-440 Bucket List Racing, driven by Dustin Echols of Sultan, Wash.

Defending national champion Andrew Tate and the U-1 Delta/RealTrac–Jones Racing confirmed late Monday they are set to start the season at the Columbia River test session. Tate said his boat was totally taken apart in the winter and gone through meticulously by last year’s crew chief, Jeff Campbell.

“The boat is back together, and we are testing all the systems and making sure that it’s ready to go to Guntersville,” Tate said.

After a frustrating 2018 season, Jimmy Shane and his freshman race boat hopes to gather valuable time on the water leading into the season opener. The team is slated to test its primary race hull, which debuted mid-season last year, and has yet to make any announcements on who will replace Cindy Shirley, who recently resigned as crew chief, or if they intend to race their second boat.

The renamed U-11 J&D’s presented by Reliable Diamond Tool and its driver, Tom Thompson, are planning to test off-season upgrades, which were made after a strong third place in the national championship in 2018. “This year, the U-11 team is more prepared than ever,” Thompson said. “The team has worked very hard during the off season, making some very interesting changes and upgrades that should prove very exciting.”

Also scheduled to test is J. Michael Kelly, driving the U-12 Graham Trucking. In the two races Kelly’s team entered in 2018, their best finish was second at Seattle’s Seafair Trophy race. This year the team is expected to compete the entire season and give Tate, Shane, Thompson, and the remaining fleet a run for their money.

“I’m excited and so is the team to be back out racing a full season,” Kelly said. “The competition will be tough this year and I wouldn’t want it any other way. We know we have a very competitive boat and there is no better way to start the season than by testing in the Tri-Cities.”

One of the favorites of younger race fans, the U-440 Bucket List Racing and driver Dustin Echols, will again make the test in the team’s bright orange hull. Although an underdog, Echols and his team will take advantage of their time on the water. As a result of their testing last year, the team was able to increase its competition speeds by over 15 mph. They hope this year’s testing will provide valuable data for the upcoming season.

“This has been a huge off season for our team,” said Echols. “We learned so much last year and desperately needed to make some changes to the boat. We replaced several key pieces of hardware to help the boat handle higher speeds. Our engine guys are smiling, and team co-owner Kelly Stocklin started making some brand-new propellers.”

The test session will allow the U-440 Bucket List Racing team time on the river and ensure that the changes will be effective in the 2019 season.

The daylong event held on the Columbia River is hosted for the 12th year by the Tri-City Water Follies organization, promoters of the July 26-28 HAPO Columbia Cup race.

Kathy Powell, Tri-City Water Follies event director said, “We are happy to host the hydroplane racing community and to kick-off the start of their racing season. The hydroplane testing is a great way for us to signal the start of summer in the Tri-Cities community, as well. You know when there are hydros on the river, it must be summer,” she said.

Powell said a vintage unlimited hydroplane from Chelan, Wash., will also participate in the event.

Several food trucks from the area will be at the Lampson Pits to complement the day’s activities.

H1 Unlimited hydroplanes are the fastest racing boats in the world and the American Power Boat Association, doing business as H1 Unlimited, sanctions races. With deep history, the 116-year-old sport ‘s majority of hydroplanes are powered by turbine engines that produce 3,000 horsepower, allowing the powerboats to reach speeds of nearly 200 mph, producing a massive 60-foot tall, 300-foot long wall of water behind them called a roostertail. With very few restrictions, these majestic hydroplanes race in front of shorelines, riverfronts and beaches packed with fans on bodies of water throughout the United States. For additional information on the 2019 H1 Unlimited Hydroplane Racing Series, visit the series website at www.H1Unlimited.com or visit on social media at Facebook’s ‘H1Unlimited’, Twitter ‘@H1Unlimited’ and Instagram ‘@h1_unlimited_hydroplanes’.