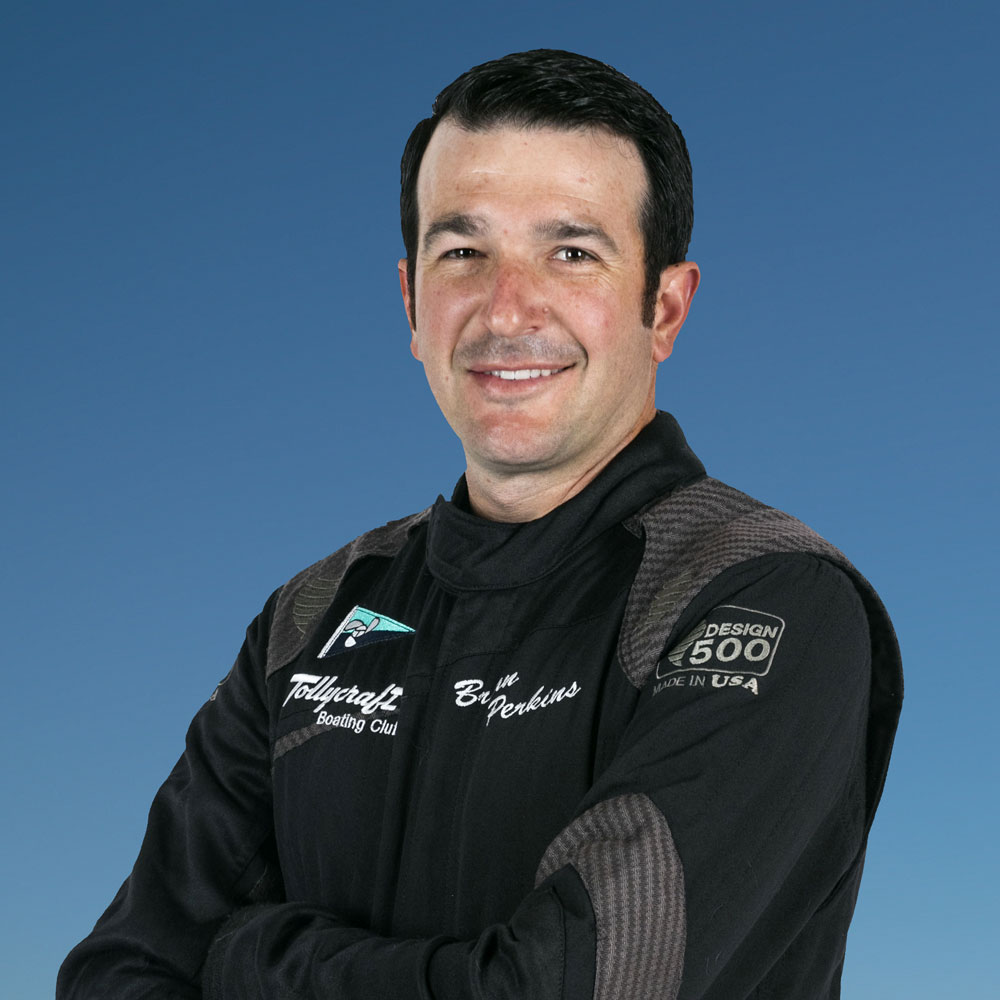 Brian Perkins grew up in the Seattle area dreaming of driving a H1 Unlimited hydroplane like his boyhood heroes. It was a dream that was more realistic than for most because his family was active in the sport. He grew up around Seattle’s Stan Sayres Park every summer while his parents were involved as volunteers for Seattle’s Seafair trophy race. That familiarity with the hydroplanes led to him becoming a helper on a team when he was only 15-years-old.

His debut behind the wheel of an H1 Unlimited hydroplane came in 2007 when he drove the U-21 Meyers’ Auto Tech, campaigned by the Freedom Racing Team of San Diego.

Aside from the racecourse, one of his greatest accomplishments, he says, came in 2011 when he was driving the boat in San Diego. That’s when he met his wife Erin, who worked as an animal trainer at SeaWorld. The two live in North Bend, Washington, with their two dogs (Dixon and Embry).

Perkins is in the cockpit of the newest boat in the H1 Unlimited Hydroplane Racing Series that was launched and last raced in 2019. Built for the by father-son ownership of the O’Farrells, the boat has been under construction on-and-off for ten years. Truly a family affair, the O’Farrells have three generations of family that crew on the team, with Gunnar O’Farrell looking to share driving chores in 2022. With the new boat’s return, the O’Farrells and their team hope to step into the winner’s circle this season. 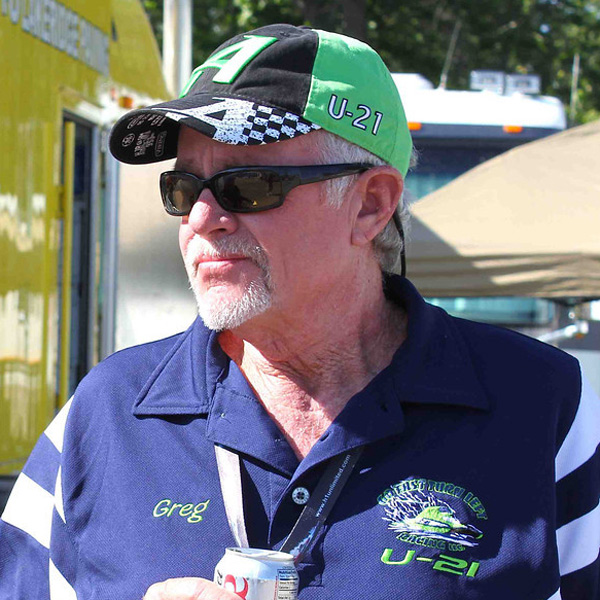 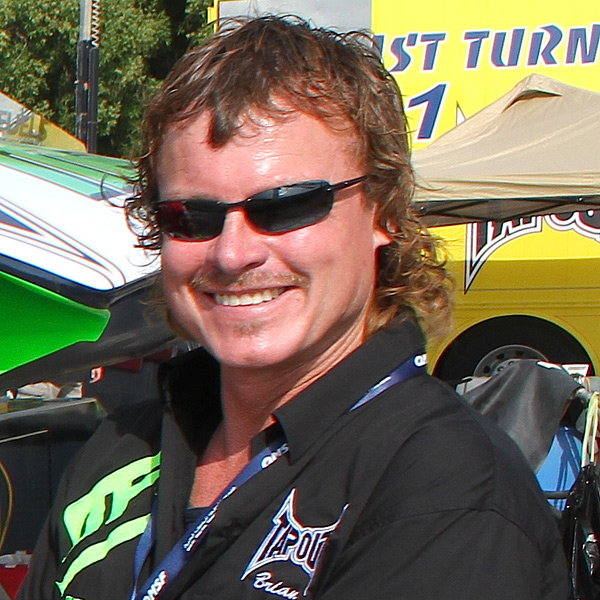 Greg and Brian O’Farrell were born with boat racing in their genes. The father-son team represent the second and third generation within the family to have such a strong connection to hydroplane racing. As a kid, Greg attended every Seafair, except for the year he was in boot camp. “I got hooked early. My father was friends with Willard Rhodes who owned the Thriftway team. Bill Muncey gave me a ride in Thriftway Too and there was no turning back!”

As he built the very successful Lakeridge Paving Company, Greg couldn’t escape the lure of hydroplaning. In 2005, Lakeridge Paving sponsored a Fred Leland hull which was driven by Jeff Bernard. In front of a huge Seafair audience and on live television Miss Lakeridge Paving made news by passing Jeff’s uncle Terry Troxell who had just won the APBA Gold Cup.

Encouraged by the success of sponsoring a boat, Greg stepped up and bought two Leland hulls including “Lucky.” With Brian Perkins behind the wheel, the U-50 “Spirit of the Navy” made every final heat on the eastern circuit and the team garnered the respect of everyone in boat racing.

The next move for Greg and Brian was to step up to a more competitive ride for 2010, so they purchased the U-21 from Kevin Aylesworth and Jeff Johnson. After a winter of tuning, the U-21 became a contender on the H1 Unlimited circuit.

Brian’s son Gunnar and his daughter Makenna have jumped into racing and both of them are doing very well racing J Stock outboards.

Each year, Go Fast Turn Left Racing has improved, and finished 2nd place in the 2014 Detroit Gold Cup. But the next stop on the circuit proved to be a huge setback. While racing to make it into the Final Heat in Tri-Cities, driver Jamie Nielsen blew over the U-21, suffering major structural damage and retiring the boat for the remainder of the 2014 season. Go Fast Turn Left finished the season garnering points from the Schumacher Racing U-37 hull, renamed the U-21 for San Diego and Doha. 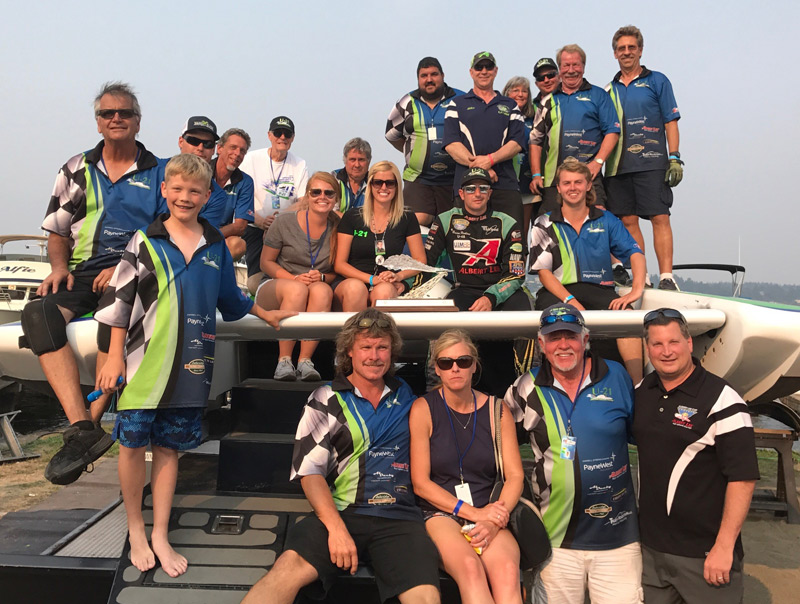 Whether you’re a homeowner or project manager, our quality paved driveways and parking lots offer an inexpensive, durable pavement solution for any residential, commercial, or industrial project.

At Lakeridge Paving Company, as an asphalt paving contractor in Tacoma, WA, we provide a full range of site development and utility services to enhance the look, feel, and use of any landscape. With over fifty years of experience, our entire team has come to value dependable service and quality control for the residents and businesses in and around Seattle. The customer-driven services we provide allow us to stand out in the paving industry and help your landscape do the same.