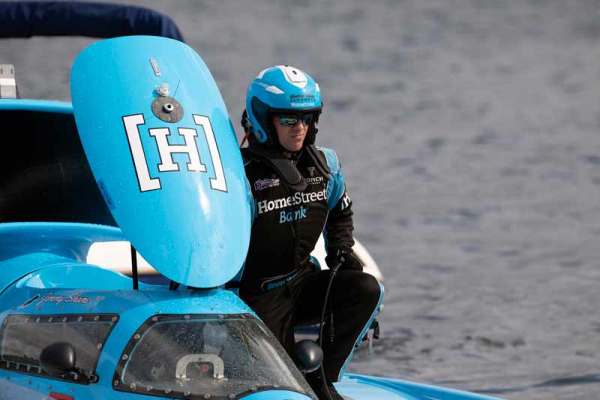 SEATTLE (August 2, 2019) — Veteran unlimited hydroplane driver Jimmy Shane, from Maple Valley, Wash. was top qualifier at the first three races this season, and added another pole to his scorecard today at the HomeStreet Bank Cup hydroplane race on the 2-mile Lake Washington course.

On a gray and cloudy Seattle day, the 33-year-old Shane piloted his U-6 “Miss HomeStreet” hydroplane to a speed of 154.513 mph, nearly two mph shy of the course record he previously set in 2014.

Shane said, “Conditions were not ideal.  It looked good for the first couple runs during qualifying but the winds started gusting pretty good.” Shane continued, “Fortunately the boat has such a good balance.  I hate the rough water, but the boat stayed level and it just flew over the top of the rough stuff.  That’s how we were able to get our top qualifying speed.”

Defending National Champion Andrew Tate in the U-1 “Delta/RealTrac” was over five miles an hour slower than Shane, posting a speed of 149.120 mph.

Last weekend’s HAPO Columbia Cup winner in Kennewick, Wash., J. Michael Kelly in the U-12 “Graham Trucking” was third in qualifying with a speed of 148.450 mph.

Kelly, from Bonney Lake, Wash. said, “Third in qualifying, I’m happy with that.  Faster is always better but we will be there, we have always been real strong in competition here in Seattle.” He said conditions on the water were pretty good, a little rough in the morning but by the afternoon it was fine.

How to view and listen to the races

This weekend their will be several way to watch and listen to the hydroplane races. This year, KONG-TV is proud to present live coverage of the H1 Unlimited hydroplane finals and much more on Sunday, August 4 from 1 p.m. to 5 p.m. Watch all the action on KONG-TV channel 6/16, online at king5.com, or streaming on the brand new KING 5 app.