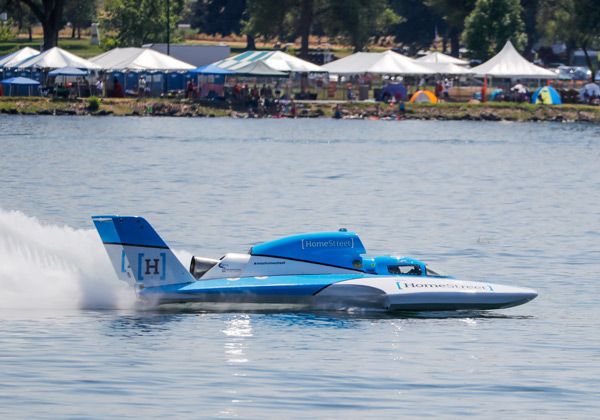 KENNEWICK, Wash. (July 26, 2019) –Jimmy Shane from Maple Valley, Washington led the ten H1 Unlimited Hydroplane Racing teams during Friday’s qualifying, with a speed of 163.573 mph for the 54th annual HAPO Columbia Cup on the Columbia River. Shane, driving the U-6 “Miss HomeStreet” was 5 mph ahead of his nearest competitor, Andrew Tate, from Walled Lake, Mich., in the U-1 “Delta/RealTrac” who was second with a speed of 158.233 mph.

Bonney Lake, Washington’s J. Michael Kelly in the U-12 “Graham Trucking” was third, at 155.881 mph followed by U-11 “J&D’s presents Reliable Diamond Tool” driven by Jamie Nilsen of Gig Harbor, Washington, with a speed of 154.588mph.

“It feels real good,” a smiling Shane said, “we maybe beat or matched our qualifying speed from last year, but with the warmer weather today our engine performance went down as the outside temperature increased.  To end on the fastest speed we ran all day long, that’s a good sign, and we did it during the hottest part of the day.”

This is Shane’s third pole of the season.  He also topped the pole in Guntersville, Alabama’s Southern Cup and the Madison, Indiana’s Gold Cup races.

Tate said his team had a good day but “the blue (Miss HomeStreet) boat is obliviously really, really, fast, so everyone here is chasing them.”  He added “they are the ones with the bull’s-eye on their back even though we have the U-1 national champion number on our boat and are the defending Columbia Cup champion.  We are getting dialed in and we will be ready for the preliminary heats tomorrow.”

In the “Dash-for-Cash” race, Shane came from behind after a late start to the starting line, narrowly beating Bert Henderson in the U-7 “Boitano Homes” by a foot in the five-lap exhibition race.