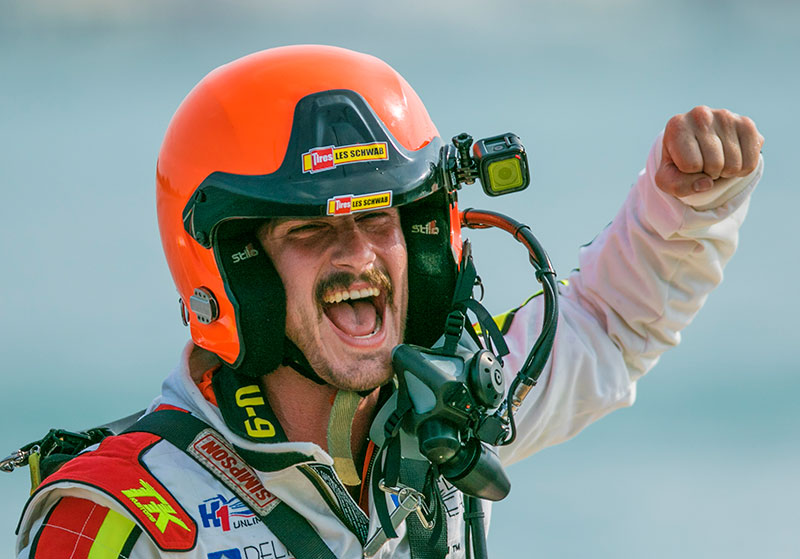 Tate powered in front of Jimmy Shane in the U-1 Miss HomeStreet at the start of the race, and never lost the lead.  Tate finished the five-lap final on the 2.72-mile racecourse with an average speed 155.460 mph, nearly 2 mph faster than Shane.

Tate etched himself not only in the record book for winning the Gold Cup, but becomes the only son/father duo to win the Gold Cup.  His father Mark Tate won the oldest trophy in motorsports in 1994 and 1991.

By winning the race, Tate also clinched the H1 Unlimited Hydroplane Racing Series National High Points Championship, and will be awarded the U-1 number in 2019.

Tate said after, “I don’t have the words,” a fourth-generation boat racer.  “I can’t describe it, I haven’t had time for it all to sink in.”

Later he gathered his thoughts and said, “the inside lane is always an advantage, and we had a good start,” said the 29-year-old Tate, who was second to Shane after the first of the five laps in the final. “The buffer between me and Jimmy helped.

“We changed one thing for the final, and it seemed to work. Kudos to the crew. They gave me a rocket ship.”

All eight preliminary heat races were run Sunday after half were postponed Saturday by high winds.

Shane who finished second in the winner-take-all final won all four preliminary heats his team entered.  He finished the Gold Cup final with an average speed of 148.864 mph.

A disappointed Shane said after, “We should have come away with the Gold Cup win. Unfortunately for us, it didn’t work out.  He continued, “Andrew won, and congratulations to them.”

Third place went to the U-11 Reliable Diamond Tool presents J&D’s, driven by Tom Thompson with an average speed 113.325 mph.  Thompson was penalized one minute for a line violation, but it did not affect the order of finished.

Fourth place went to Dustin Echols driving the U-440 Bucket List Racing with an average speed of 84.710 mph.

The U-7 Spirit of Detroit and driver Bert Henderson were disqualified when he entered the restricted area of the racecourse.

The fastest lap in the final went to Tate who posted a speed of 154.601 mph on lap two of the final.

U-7 Spirit of Detroit, Henderson, DSQ