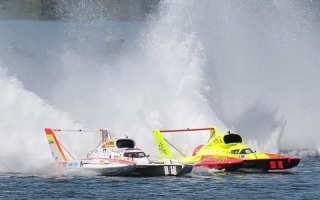 The U-1 Miss HomeStreet will proceed in tomorrow’s action as the leader of the 2017 HAPO Columbia Cup in the Tri-Cities, Washington, but close behind are the U-9 Les Schwab Tires and the U-12 Graham Trucking. Today’s racing featured some close racing action as well as a couple of unfortunate accidents that caused damage to two different boats. None of the drivers involved were seriously injured.

At the end of today’s racing action, defending champion Jimmy Shane and the Miss HomeStreet Bank is leading with 880 points, while Andrew Tate in the Les Schwab stands in second with 800 and J. Michael Kelly in the Graham Trucking right behind with 770. Jimmy King in the U-3 Grigg’s Ace Hardware goes into tomorrow’s action with 585 points, Greg Hopp in the U-99.9 Miss Rock Powered CARSTAR earned 450 points today, and Tom Thompson in the Miss DiJulio presents J&D’s has 350 points.

The day’s first racing action was to feature the 440 Bucket List Racing, the Miss HomeStreet Bank, the Graham Trucking and the U-21 Darrell Strong presents PayneWest Insurance. In preparing for the start, however, the 440 hit a patch of rough water, which caused Echols to dig into the water and spin out. The accident left debris on the course, which caused the race to be stopped and the boats returned to the pits.

In Heat 1B, Tom Thompson took the inside lane and led at the start, but was passed by Andrew Tate during the second lap. The boats finished in that order, but Thompson was disqualified, giving second place to Jimmy King and third place to Greg Hopp. 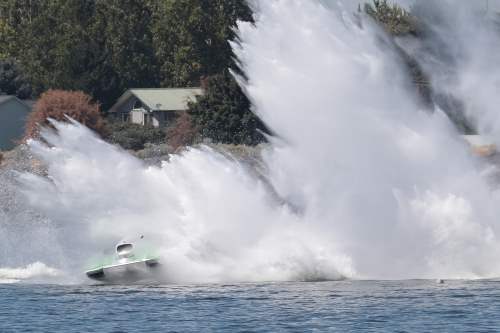 In the restart of Heat 1A, Shane grabbed the inside lane at the start from the Perkins, while Kelly started on the outside. Perkins was in the lead heading into the first turn, but Shane soon passed him and by the time the boats were going down the backstretch during the second lap, he was leading by the length of a roostertail.

As the PayneWest boat entered the final turn before completing the second lap, the boat suddenly lost its steering when part of a propeller blade broke, which then caused the prop strut and rudder to be broken off. The result sent the boat into a wild spin that threw spray high into the air and caused Perkins to bang his knee hard in the cockpit. Kelly had to turn right to get around the spray and was able to continue on to a second-place finish far behind Shane. Damage to the U-21 is severe enough that the boat is likely done for the weekend, and the hard right turn caused damage to the rear of the Graham Trucking boat that was repaired before the start of the next heat.

In Heat 2A, Tom Thompson grabbed the inside lane at the start, but J. Michael Kelly passed him on the outside going into the first turn while Jimmy King was third. The three boats stayed within a roostertail of each other throughout the race, but Kelly stayed in the lead to the end. 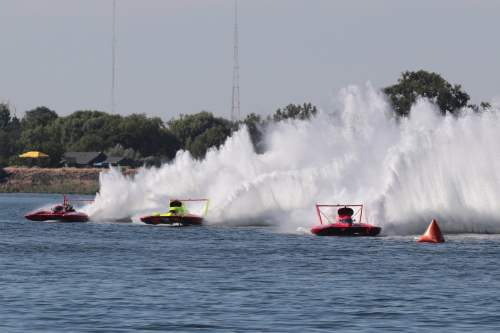 The two winners of the first set of preliminary heats faced each other in the day’s final race, Heat 2B, and the two didn’t disappoint the large crowd watching. Jimmy Shane managed to get the inside lane on Andrew Tate at the start and that’s what made the difference. The two raced virtually side by side for four laps and Shane was able to hold Tate to his outside and take care of that advantage. He crossed the finish line about a roostertail’s length ahead of Tate while Greg Hopp finished a distant third.

The racing on the Columbia River will continue tomorrow with two more preliminary heats and a winner-take all final heat that will determine which team will take home the HAPO Columbia Cup trophy.