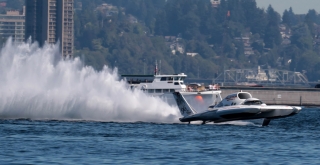 Jean Theoret flies the U-96 in qualifying Chris Denslow photo

SEATTLE—Last week’s APBA Gold Cup leading qualifier Jean Theoret understands that being the fastest in testing doesn’t win you races, but it sure makes you feel good going into a weekend of competition.

Theoret in the U-96 Ellstrom Elam Plus will be the team to beat after taking the top qualifying spot with a one-lap average speed of 150.583 mph for this weekend’s Albert Lee Cup at Seafair. This race is the 65th annual H1 Unlimited Hydroplane race on Lake Washington.

Theoret was also the fastest qualifier last week at the HAPO APBA Gold Cup in Tri-Cities, Wash. but a championship final pre-race violation disqualified the team, allowing Jimmy Shane in the Oberto  to take the prestigious trophy.

“Getting the top speed in qualifying doesn’t win you the race but it is great for the entire team,” said Theoret. “Everyone works hard and put in the type of effort that makes it special.

“Then when you have a battle like Jimmy (Shane) and I had for the top spot it’s fun for the fans, the racing teams, Jimmy and me.”

The Theoret and Shane battle for the top qualifying spot on the two-mile course started when the Oberto had the fastest lap in round one of the Friday afternoon qualifying going 148.880 mph.  Theoret was second in the first session with a 147.786 mph average.

The Ellstrom Elam Plus team changed the propeller and made some adjustments in the rear wing for the second session and went out to hit the 150 average—the only boat to hit the mark today.

“This was a fun qualifying session,” said Shane. “Jean and I really had a good battle going.  We knew we had to do some work over the past week to go faster, and I think we accomplished that in the past week.”

Testing and the first set of preliminary heats will be run Saturday with more preliminary and the championship heat on Sunday.

For ticket and schedule information, go to www.seafair.com

Three H1 Unlimited Hydroplane teams  (U-22, U-18, U-12) can qualify during testing but receive no qualifying points. Testing will take place Saturday morning.