96 Spirit of Qatar Set For – Monday 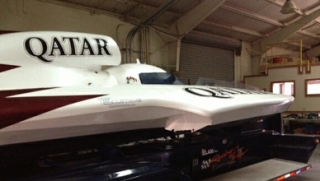 Erick Ellstrom, owner of the 96 Spirit of Qatar has announced that the boat will join Our Gang Racing’s 95 Spirit of Qatar and two NHRA “cousins” for a photo shoot Monday morning at Pacific Raceway in Kent.

The two H1 Unlimited Hydros will be photographed with  two Top Fuelers from the Al-Anabi team,  owned by Khalid Bin Hamad al-Thani, the 22-year-old son of the emir of Qatar, in partnership with Alan Johnson.

Al-Anabi means “Go Maroon” which refers to the flag of Qatar’s white and maroon colors.  Maroon is the predominant color on the two hydros and the dragsters.

Sheikh Hassan Bin Jabor Al-Thani, from the same family, is president of the Qatar Marine Sports Federation which sponsors the boats in the H1 series and promotes the Oryx Cup UIM World Championship held annually on Doha Bay.

Ellstrom’s 96 Spirit of Qatar was badly damaged in January at the Oryx Cup in Doha and has been undergoing repairs in the team’s Seattle shop. Ellstrom says the boat has been repaired and repainted enough to look good in a photo and probably could have made an appearance at Seafair if a boat was needed to fill out the field.

“Seafair needed a commitment from us late Wednesday because of the situation with the cranes and the layout of the pit area,” explained Ellstrom. “We knew that we could not have all of our systems at 100% by the weekend and we would be working with a new driver, so we made the tough decision to skip Seafair and continue to concentrate our effort on the 95 Spirit of Qatar and try to add another win to Kip Brown’s victory in the Gold Cup.”

Two key members of Ellstrom’s 96 team have been with the 95 crew throughout the 2013 season and Ellstrom’s 5 Axis Industries has been busy supplying fiberglass molds as well as machined propellers and other parts for several other racing teams.

“It’s hard to be on the sidelines, especially in our home town,” added Ellstrom. “But I am confident we made the right decision.  We will go get our picture taken Monday as our sponsor requested, then go back to Ballard and finish the boat and go from there.”