Tate Wins 3rd of 2018 at Seafair as Phipps Flips

Andrew Tate picked up his third win in four races this season with a victory in the Albert Lee Cup on Lake Washington in Seattle on Sunday.

Tate, driving the Lori and Mike Jones-owned U-9 Les Schwab Tires, physically finished second on the race course but was awarded the win when Jimmy Shane and the U-1 Miss HomeStreet was hit with a one-minute penalty for going below 80 mph twice during the pre-race milling period.

“That was a goofy last heat there,” Tate said. “I couldn’t be happier for the Les Schwab team. They worked their butts off. We’ve got a great sponsor and a great boat.”

The victory was the sixth of Tate’s short three year career and the eighth for the Jones Racing Team. It also allowed him to increase his lead in the H1 Unlimited Hydroplane Racing Series National High Points Standings to 1,998 over Shane and the U-1 Miss HomeStreet with just two races to go in the season.

Tate knew that he was going to have his hands full in the final against the new U-1 Miss HomeStreet craft, which had an impressive debut with three heat wins, including one against Tate.

Tate was outside of Shane in lane four at the start of the heat and was behind when the two drivers cleared the first turn. Shane slowly began to pull away when the penalty was announced on lap three.

“We were both cruising around 80 and I guess there was a call made there on the 1 for going under 80,” Tate said. “It’s unfortunate. You don’t want to win that way. (Shane) was in a great position. Unfortunately a call was made and we’ll take it any way we can get it.”

With Shane now relegated to fifth, Tate had little trouble in pulling away for the win. J. Michael Kelly finished second in the U-12 Graham Trucking with Brian Perkins placing third in the U-21 PayneWest Insurance. Rookie Aaron Salmon was fourth in the U-99.9 CARSTAR powers Miss Rock. 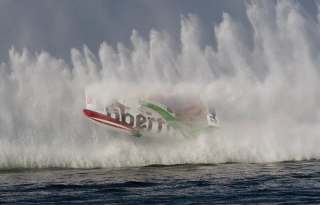 The first running of the final heat was stopped after Cal Phipps suffered a 360-degree blowover in his U-1918 Oberto Beef Jerky. Tom Thompson appeared to cut off Phipps as the pair entered the second turn of the first lap causing Phipps to ride up the roostertail of Thompson’s U-11 Diamond Reliable Tool presents J&Ds.

The U-1918 Oberto landed right-side up and Phipps quickly exited the craft uninjured.

“I got up there and there wasn’t a lane,” Phipps said. “There is supposed to be a seven-boat overlap and it didn’t look like seven boats to me.”

The H1 Unlimited Hydroplane fleet will now swing back east for the annual Gold Cup in Detroit Aug. 24-26.