Andrew Tate in the U-9 Les Schwab Tires hydro topped the qualifying ladder at the 2017 HAPO Columbia Cup with a 160.702 MPH lap that almost resulted in a disqualification after two N2 violations were detected. The team was levied a $200 fine but kept the qualifying result. A second run was discarded after violations were found.

Jimmy Shane’s U-1 Miss HomeStreet took second spot with a 157.114 MPH in his second run after the first was disallowed with fuel flow violations.

J. Michael Kelly with the new-for-2017 U-12 Graham Trucking team grabbed third with a 154.713 MPH lap. The U-3 Grigg’s presents ACE Hardware with Jimmy King driving followed in fourth place. Kelly & King were the only drivers that did not record any technical violations in qualifying.

Tom Thompson’s U-11 DiJulio presents J&D’s ran fifth at 153.885 MPH and Brian Perkins rounded out the boats that attempted qualifying with a 153.560 MPH lap.

Dustin Echols’ U-440 MAC Truck Repair & Towing damaged the right sponson in testing and the team is attempting to repair the boat in the pits. The U-99.9 CARSTAR/Miss Rock with Greg Hopp driving did not run. 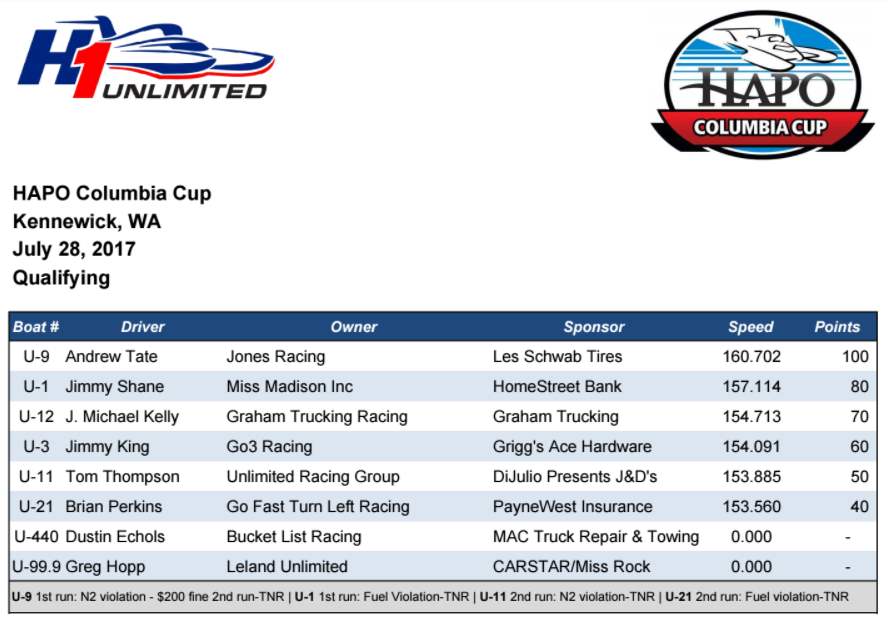