DETROIT—Over the course of the 2015 H1 Unlimited Hydroplane season, Jimmy Shane in the Oberto and J Michael Kelly in the Graham Trucking have put on a show that few boat racing fans will forget.

On Sunday, the two drivers didn’t disappoint the fans along the Detroit River shoreline. Shane held off Kelly this time to win the UAW-GM Spirit of Detroit Hydrofest in a battle that is becoming commonplace.

“Growing up I heard about rivalries like (Bill) Muncey and (Dean)  Chenoweth, now we have Kelly and Shane and I think we can expect more races like we had today,” said Shane. “I can’t thank the City of Detroit enough for all they did to put on this race.”

Shane and Kelly again battled deck-to-deck for four of the five laps in the championship winner take all final heat. And once again, the inside lane was the key as it was all weekend for the heat winners when penalties did not occur.

With Shane in lane one and Kelly in lane two, it looked like Shane in the Oberto would take this race on lap one.  This time it was the Graham Trucking and Kelly who fought back. Kelly kept inching closer to Shane through lap two and three and then caught Shane on lap four when the Oberto hit rough water in the Belle Isle turn, giving Kelly the opportunity to get the lead.

Then it was the inside lane once again that gave Shane the break, exiting the tight Roostertail Turn two, Shane pulled ahead as Kelly’s boat bounced wildly through the rollers and wakes of the competitors.

“I caught him going into the last lap, but I just couldn’t get past Jimmy,” said Kelly.  “Jimmy ran a great race just like he did in Seattle but this time he came away with the win.”

From Madison, Indiana to Detroit, it has been the Shane/Kelly show.  Three weeks ago in Seattle, the two drivers put on a similar show.  Both boats battled deck-to deck with Shane catching Kelly on the final lap only to receive a penalty for encroachment.

On Sunday, there were no penalties in the final heat, but once again the boats were neck-and-neck until Kelly hit the rollers going into the last lap. The Oberto took the win by seven boat lengths averaging 147.795 mph. Kelly averaged 146.992 mph.

Sunday’s victory was Shane’s 10th career H1 Unlimited Hydroplane win, and it was also his second consecutive win in Detroit.  Shane won all four heats in Detroit and every match up with Kelly. It was also the first time this season that Shane was able to control lane one in all heat races. 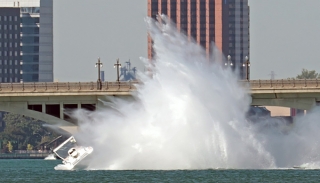 Unlike Saturday, wind conditions made the Detroit River course treacherous. Jean Theoret, the UAW-GM Hydrofest fastest qualifier, went airborne on lap two of the first heat of the day in the Belle Isle turn. Theoret in the Ellstrom Elam Plus was leading the heat when he hit a roller, and then the wind sent the boat into a spin.  He landed upright and escaped with no injuries. (Watch the incredible onboard footage of the accident)

Kevin Eacret in the Dooley’s present the Miss CARSTAR won his first H1 Unlimited Hydroplane heat when two of the four boats jumped the gun and were penalized in preliminary heat 2-C.  One of the boats, Miss HomeStreet Bank driven by Jimmy King, was the recipient of a similar penalty win on Saturday, but today’s infraction took him out of the championship final.

Other heat winners today were Kelly in 2A and Scott Liddycoat in 3B.

Shane and Kelly continue to be one-two in the national high point race.

The H1 Unlimited Hydroplanes finish the season on Mission Bay in San Diego on September 19-20.