Tate, 33, of Canton, Michigan returns to the cockpit of an Unlimited after a successful stint racing in the Grand Prix class of the Hydroplane Racing League.

The 2018 H1 Unlimited National Champion and A.P.B.A. Gold Cup winner is a hard-charging fan favorite and a natural fit for the Miss Madison Team. A fourth-generation racer, Andrew began in outboards at nine years old. Since 2006 when he moved to the Inboard classes, Tate has won more than one hundred races total in American Powerboat Association or Hydroplane Racing League events, including nine national championship titles, and has been inducted into the APBA’s Hall of Champions three times (2010, 2016 and 2018).

Joining the team, Tate said that “this is a little kid’s dream come true. It’s great to be a part of this team.  Miss Madison has become a pillar in the world of boat racing and the city of Madison has been a part of my life since childhood.  I’m looking to build on the Miss Madison legacy of success with Goodman Real Estate as I build my own legacy with the team.  With Jimmy Shane’s retirement, I know that I have big shoes to fill on this team. Some of the success I’ve had already is that much more meaningful because I beat Jimmy Shane”.

John Goodman, Chairman of Goodman Real Estate welcomes Andrew to the team, stating, “Goodman Real Estate is here not just to race, but to win. We built a solid foundation with the team this past season. With Andrew onboard and some off-season updates to the boat, we know that we can take it to the next level.”

“We are extremely excited to have Andrew join and lead our team” added Miss Madison Board President Charlie Grooms.  “The 2023 H1 Unlimited season will certainly be a “reset” for the Miss Madison team in any number of ways and we could not be happier than to have Andrew lead us in what will be our 62nd year of racing.

Andrew, his mother, his father, grandfather, and great-grandfather, have all been champion racers and our Board, sponsor partner – Goodman Real Estate, and our crew are excited to have an Unlimited National Champion driver lead us in 2023 and beyond. Our owners, fans and all our sponsor partners have come to expect National Championship efforts and we are certain Andrew will continue that winning tradition.” 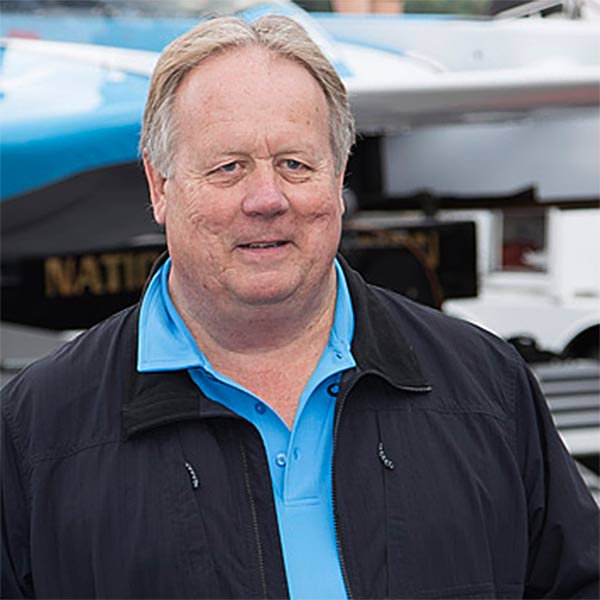 He started washing parts when his uncle, Jon Peddie, was named the team’s driver in 1977. Over the years, he graduated through the ranks to become Crew Chief. Currently, Grooms is the President, Team Manager and Owners’ Representative. He oversees all aspects of the team including sponsorships, logistics, budgeting, personnel and other administrative duties.

When not racing, Charlie and wife, Nancy reside in Madison, Indiana and operate private businesses. They have three daughters, Codi, Cati, and Cortni who assist the Miss Madison team at race sites with merchandise sales.
Miss Madison Team:
The Miss Madison Racing Team was established in 1961 when industrialist Sam DuPont donated his unlimited hydroplane known as Nitrogen to the people of Madison, Indiana. The U-6 Miss Madison has been campaigning on the unlimited circuit ever since – the longest running continuous team in the sport.

When the original Miss Madison hydroplane was destroyed in a racing accident in 1962, DuPont sold his second boat, Nitrogen II, to the city for $5,000. The world’s only community owned hydroplane is administered by a board of directors appointed by the city’s mayor. Charlie Grooms serves as President of the Miss Madison, Inc. Board and Team Manager.

The U-91 Miss Goodman Real Estate hydroplane was built by the Miss Madison team and entered competition in 2007. 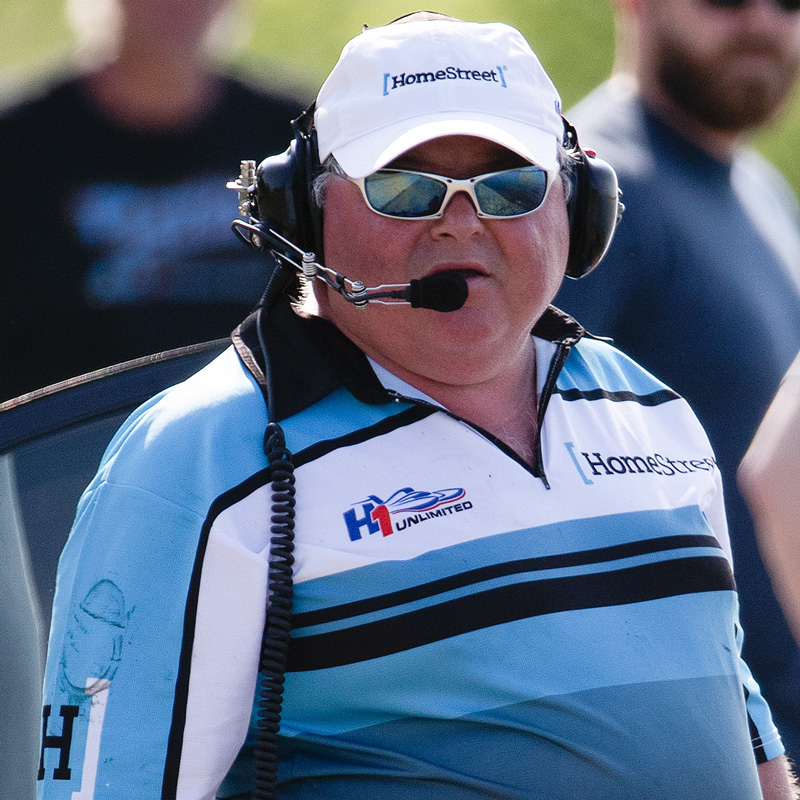 Michael Hanson has a long history as a hydroplane racer, crew chief and builder. He first qualified as an unlimited class driver in 1986 driving Fred Leland’s U-100. He moved to Ritchie Sutphen’s U-66 Sutphen Spirit in 1988, but when the team disbanded mid-season due to a crash, he became available to drive for Miss Madison Racing. Michael was with Miss Madison from that time until 1998. He had one win driving Miss Madison at San Diego in 1993. In unprecedented fashion, Michael drove from trailer position at the start of the race to take the win. Mike collected 3 additional unlimited victories. As back-up driver for an injured Chip Hanauer, he drove Miss Budweiser to victory at the 1994 Texas Hydrofest.

After a request from then Miss Madison, Inc. Chairman, Bob Hughes, Michael returned to Miss Madison Racing in 2004 as Crew Chief. With the Oberto sponsorship and a new Miss Madison hull in 2007, Michael led the team to numerous victories and 4 National Championships before his departure following the 2013 season. In 2018, Michael along with his brother, Larry, led the completion of building the team’s new racing hull introduced in Tri-Cities, WA in August of that year. In 2019, Michael was back leading the Miss Madison crew.

Michael lives in Bonney Lake, WA with his wife, Tonya. Michael and Tonya have two grown children, Trevor and Aubrey, who have worked alongside their Dad on hydroplane crews throughout the years. 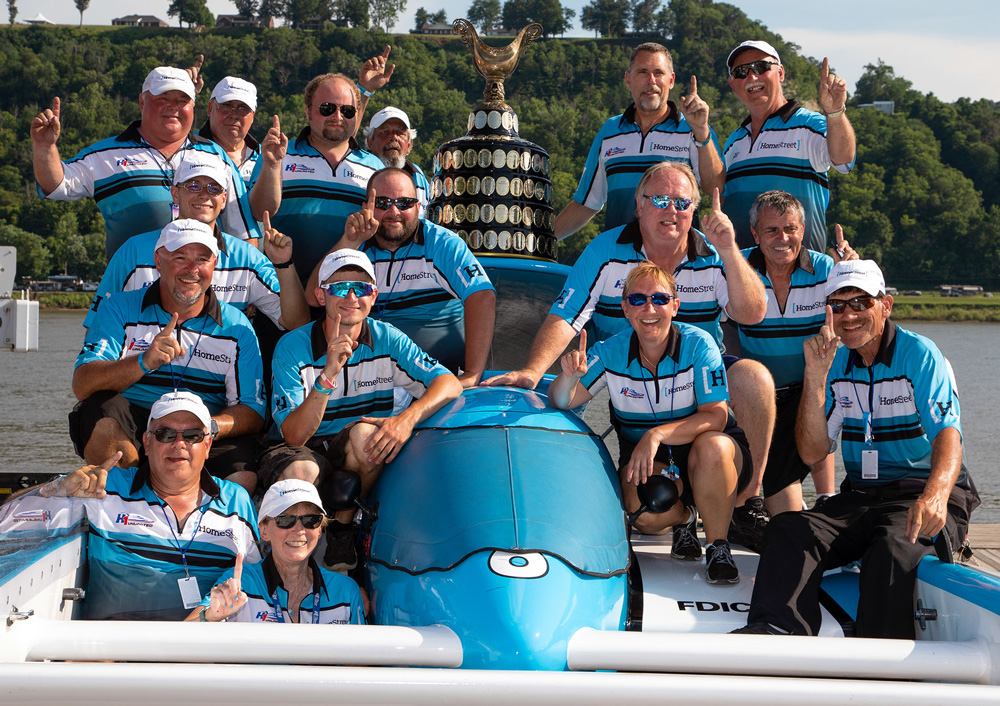 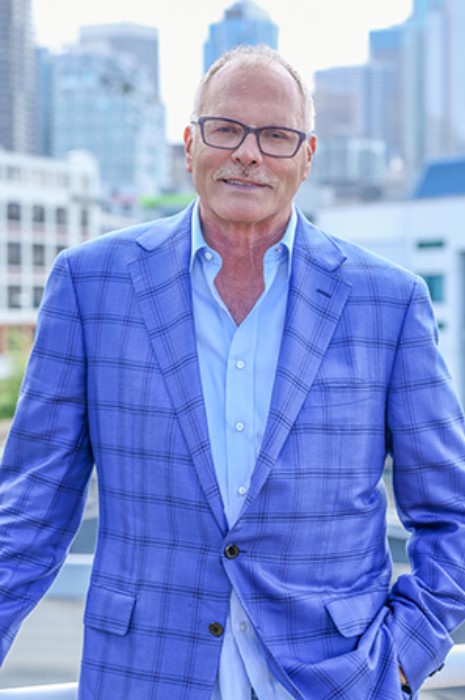 Goodman Real Estate is company with deep roots in the Pacific Northwest. Mr. Goodman is a Seattle native and GRE’s core values of Trust, Value and Humility are reflected not only in its business partnerships, but also in its local charitable giving and commitment to local issues.

John founded the Goodman Foundation in 2005. The mission of the Goodman Foundation is to fund organizations that support children and their families. Through this foundation, he supports the Boys & Girls Club, Seattle Children’s Hospital, and the Big Brother/Big Sister program, amongst many others. A Seattle-native, John is married with three kids and enjoys spending time with his friends and family, racing, golfing, and boating.