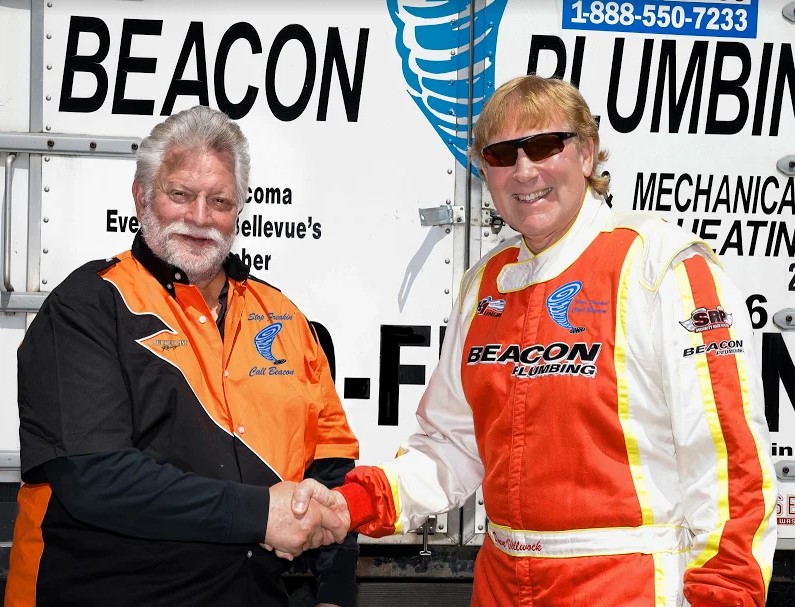 Bill Cahill, the owner of Beacon Plumbing, announced a sponsorship agreement with Kelly and Sharon Stocklin’s Bucket List Racing team of Snohomish, Washington. “I am proud to announce today that Beacon Plumbing is back in unlimited hydroplanes and we look forward to this season. We are partnering up with the legendary Dave Villwock, the winningest driver in unlimited hydroplanes and the Bucket List Racing Team, owned by Kelly and Sharon Stocklin. We are looking forward to this season and next season and doing some serious boat racing.”

Dave Villwock returns to the cockpit of Miss Beacon Plumbing. “We’re back to doing it and we’re doing it right. We have great owners in Kelly and Sharon Stocklin. Bucket List Racing has put together a very talented team that should make us competitive at the first race next month in Guntersville, Alabama. We can’t wait to get started. We’re going to win some races!”

Bill Cahill, as the owner of Beacon Plumbing in Seattle, loves to return the help and support to the Northwest community that has helped him grow into a successful business. In 2004, Beacon Plumbing began sponsoring the U-37 Miss Beacon Plumbing hydroplane. With Cahill’s sponsorship, hydroplane teams have amassed 5 victories including the 2006 APBA Gold Cup and UIM World Championship. Now teamed up with Kelly and Sharon Stocklin, Bill looks forward to more success in the H1 Unlimited series.

About Beacon Plumbing- Bill Cahill owns Beacon Plumbing in Seattle. Bill went into the plumbing business with his brother as Cahill Plumbing in 1987. In 1995, Bill started out in his own plumbing business as the owner of Beacon Plumbing in Seattle. Bill began working out of his home with five plumbing trucks. Due to good, old-fashioned hard work and a dedication to superior customer service and satisfaction, Beacon Plumbing grew and moved into its current Kent headquarters. Bill’s company today has a great team of plumbers working 24 hours a day, seven days a week, driving 45 trucks, and a large variety of industrial project equipment used to deliver superior customer service on thousands of residential and commercial plumbing projects.

About Bucket List Racing- Kelly and Sharon Stocklin teamed together in 2012 to promote a more economical alternative to current forms of unlimited racing that is more suited to entry level and start-up teams. Together with Snuskitush Enterprises, they are helping promote the idea that new owners in unlimited racing can be successful competitors. The Stocklins purchased a Lycoming T55 powered hydroplane from Go Fast Turn Left Racing in 2020 and are looking forward to racing the U-40 this summer with Dave Villwock at the wheel. Kelly has taken over Crew Chief responsibilities for Bucket List Racing’s U-440 program during the 2021 H1 Unlimited season to allow Crew Chief Taylor Evans to focus on the U-40 program.