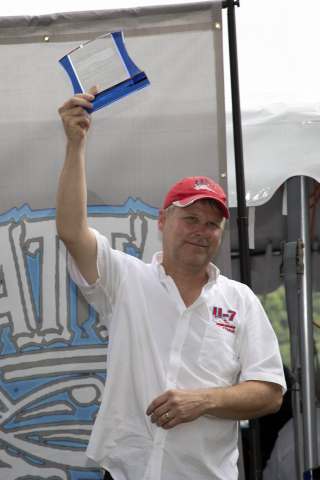 Bert Henderson accepts the trophy for his win in Heat 2A

MADISON, Ind (July 6, 2019)—Four preliminary heats were run Saturday in preparation for Sunday’s Madison Regatta Gold Cup on the Ohio River in Madison, Indiana.   Jimmy Shane, driver of the hometown boat U-6 “Miss HomeStreet/Miss Madison” and yesterday’s leading qualifier took two of the preliminary heats, winning Heats 1A and 2B.  J. Michael Kelly, driver of the U-12 “Graham Trucking” won Heat 1B and Bert Henderson, driving the Detroit based U-7 “Spirit of Detroit” won Heat 2B.

The overcast afternoon began with Heat 1A when Shane drew the same heat with last year’s National Champion, Andrew Tate in the U-1 “Delta/Realtrac.”  The showdown never materialized as Shane gained the early lead over Tate and Canadian driver Henderson and U-98 “Graham Trucking American Dream” driver Corey Peabody.  After each of the four laps, Shane increased his lead from the three trailing boats.  In the end, Shane led Henderson by at least three roostertails, and Tate finished third, a roostertail behind Henderson.  Shane averaged 130.699 mph with the fastest lap speed of 137.197 mph.

Preliminary Heat 1B saw Kelly in the “Graham Trucking” go deck-to-deck at the start line with Tom Thompson in the U-11 “J&D’s presented by Reliable Diamond Tool.”  However, officials determined that Thompson had jumped the gun and received a one-minute penalty and moved Dustin Echols in the U-440 “Bucket List Racing” to second place.  Thompson finished third.

Kelly said, “It was pretty cool to wire that start.  Bill Muncey was known for many things including his great starts.  I wasn’t around when he was alive but I have watched tapes of his starts and to nail that start with his widow Fran Muncey in the crowd was great.”

Heat 2A saw Henderson in the “Spirit of Detroit” and Thompson in the “J&D’s presented by Reliable Diamond Tool” go deck-to-deck to the start line followed by Kelly in the “Graham Trucking” and Echols in his U-440.

Henderson led Thompson by three boat lengths at the end of lap one as Kelly tried to stay close to the leaders.  By the end of lap two, Thompson had passed Henderson and led the remaining two laps, crossing the finish line first.  Henderson followed with a close second.  Kelly crossed the line in third, followed by Echols.

Officials however called an encroachment penalty on Thompson during lap one in turn two for taking away Kelly’s lane, forcing Kelly to drive inside the apex buoy.   The penalty negated Thompson’s first place finish and he was disqualified.

When the roostertails settled, Henderson in the “Spirit of Detroit” was awarded first place, followed Kelly in the “Graham Trucking.”  Echols in the 440 placed third. 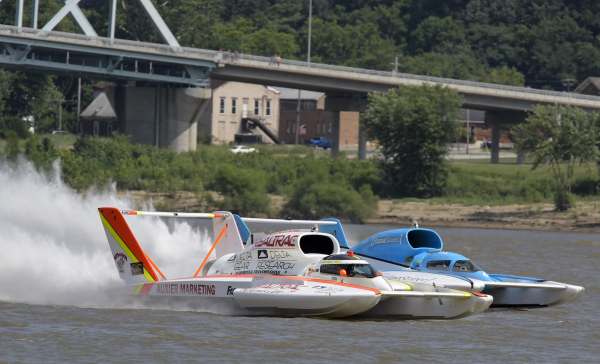 The final heat of the day pitted rivals Tate in the “Delta/RealTrac”, and Shane in the “Miss HomeStreet/Miss Madison” for a rematch of the afternoon’s earlier heat.  Peabody rounded out the field.

Tate and Shane crossed the start line dead even but shortly after, officials notified the teams that both Tate and Shane had jumped the gun and would be assessed a one minute penalty.  That meant Peabody was the leader of the race.  Always the competitors, Tate and Shane tried to make up their penalty.  By the end of the forth and final lap, Shane had nearly passed Peabody in the U-98 “Graham Trucking American Dream.”  Peabody who experienced mechanical troubles slowly pushed his boat around the racecourse and was awarded second place.  Tate took third place.