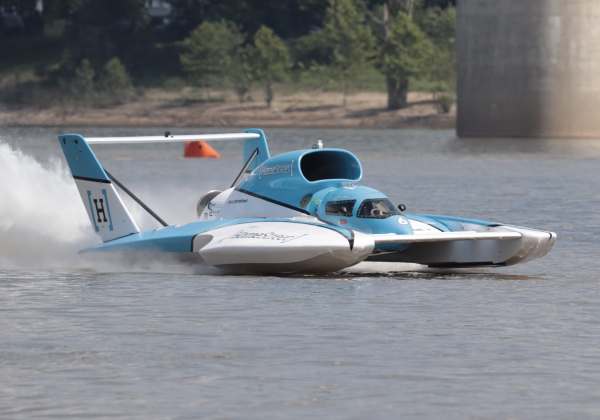 Jimmy Shane in the U-6 “Miss HomeStreet”

MADISON, Ind. (July 5, 2019) Jimmy Shane from Maple Valley, Wash. drove the U-6 “Miss HomeStreet/Miss Madison” to a two-lap qualifying average speed of 148.885 m.p.h. on the two-mile Ohio River race course and broke the single qualifying lap course record with a speed of 149.653 m.p.h.

Shane, whose H1 Unlimited Hydroplane Racing Series race boat is owned by the Gold Cup Trophy’s host city, Madison, Ind., beat Dave Villwock’s record set in 2012 in the “Spirit of Qatar” with a speed of 148.837 m.p.h. on the same course.

Friday’s event was free to the public, and thousands of race fans lined the riverbanks on both the Indiana and Kentucky to take advantage of watching seven of the world’s fastest race boats take advantage of the ideal race conditions of smooth water and clear sky.

Shane said he knew he was fast after the morning’s testing session but there was a lot of debris in the water. “We were pretty conservative.  We wanted to make sure we didn’t hit anything, messing up the boat, messing up the rudder or the prop,” Shane said. “We had to let it all hang out for qualifying and I did that.”

The 32 year-old Shane said, “I hit some pretty big holes in the water in the first turn on my first two laps, and I think on that last lap, I kept the boat flying over that rough stuff and I think that is what put us over the edge for the course record.”

Shane said he was “ecstatic for the fans, I am ecstatic for the city of Madison, and excited for the team. They worked so hard, they put in so much effort.  My team are some of the most passionate people I have ever met and to have their names in the record books, it’s an honor to be the driver and part of this team,” Shane said.

Testing begins Saturday at 11:40 AM EDT with heat races beginning at 1:20 PM EDT. The weekend will finish on Sunday with the championship Gold Cup Trophy race scheduled for 4:00 PM EDT. All heats will be live-streamed on the H1 Unlimited YouTube and Facebook accounts.