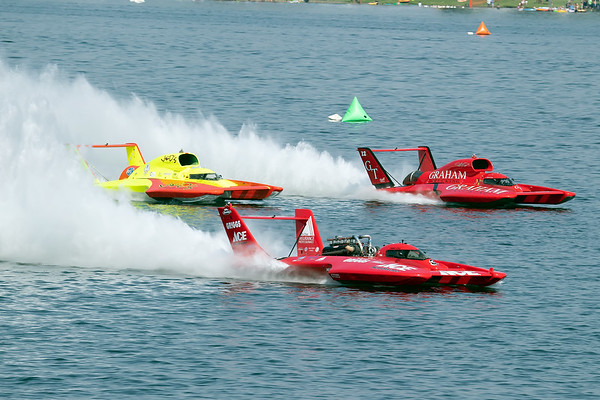 KENNEWICK, Wash. (July 24, 2019) –Ten H1 Unlimited Hydroplane Racing Series teams will take to the Columbia River for the 54th annual Columbia Cup sponsored by HAPO in Tri-Cities, Washington. The fast waters of the 2-1/2 mile racecourse, one of the longest and fastest courses on the summer circuit is shaping up to be the most competitive race of the season.

The 29-year-old Tate, the youngest driver in the field, missed the season opener and placed a disappointing fifth at the Madison Regatta’s Gold Cup trophy race at the beginning of the month. Tate was unavailable for comment.

In the past seven years, Shane has won the HAPO Columbia Cup race five times. Shane, now in his eleventh year driving an H1 Unlimited hydroplane, is having a notably different season than 2018 where he stumbled at several races, ending the year with one victory and losing the National Championship to Tate.

“This is refreshing after last year’s season where we were behind the eight-ball at this point,” Shane said. “This is about as good as it gets coming into this race; we won the first two races and set two course records with our new boat. The Miss HomeStreet team couldn’t have had a better start to the season.”

Shane said he is “looking forward to coming to Hydro Town” for another exciting weekend of racing in the H1 Unlimited Hydroplane Racing Series. Shane who has 4025 series points coming into this weekend’s boat race leads the field. He has a 1,081 point lead over his closest competitor, J. Michael Kelly (Bonney Lake, Wash.), driver of the Milton, Washington based U-12 “Graham Trucking” hydroplane.

Kelly and his team have had two strong races prior to this weekend. In Guntersville, Alabama’s Southern Cup race in June, he placed second behind Shane and finished third in the Madison Regatta’s APBA Gold Cup trophy race in Madison, Indiana.

Kelly acknowledges he needs to score valuable points to stay in the hunt for the title of National Champion, which ends in September after the San Diego Bayfair race. “We are in the hole right now and need to gain some ground in points,” Kelly said. He added that he and his team “have had good success” on the Columbia River racecourse in the past.

His first H1 Unlimited hydroplane race was here in the Tri-Cities in 2004 where he finished third. He has also placed second numerous times here. He said, “We could use a win, our team has been working hard since our last race and we would like to see it pay off with a win here.”

Kelly said the race will pose different challenges with the expected warm weather and the large field expected to churn up the race water but said, “we have a good set-up and this boat really likes this race course.”

Sure to keep pressure on Kelly will be a newcomer to this race and the only Canadian driver, Bert Henderson (Brockville, Ontario, Canada), in the U-7 “Boitano Homes.” Henderson, who until this season had only raced his boat on the Detroit River, is only trailing Kelly by 325 points. “I am super pumped. I can’t wait to be on the big 2-1/2 mile racecourse in Hydro Town, USA,” he said. “We are more prepared now than we were at the first two races. Our team has made some changes and we are prepared for the very competitive field,” Henderson said.

Another unexpected challenger this season has been 40-year-old rookie driver, Corey Peabody (Kent, Wash.), driver of the second entry of owner Rob Graham (Mercer Island, Wash.). Peabody is a childhood neighbor of Kelly, now his teammate, drives the U-98 “Graham Trucking American Dream” and sits fourth in high points.

In the off-season, Rob Graham purchased the aging race boat that was built and raced by the late Fred Leland. As a tribute to Leland, Graham duplicated the spirit of his early H1 Unlimited hydroplane sponsorship with Leland by duplicating the race boat’s livery. Graham first sponsored a hydroplane in 1996 and became an owner three years ago.

Fans will be watching closely the U-11 “J&D’s presented by Reliable Diamond Tool” after the team made a rare mid-season driver change. Jamie Nilsen (Gig Harbor, Wash.) last drove an H1 Unlimited hydroplane here at the Columbia Cup in 2014 on board the U-21 “Lakeridge Paving.” Last week Nilsen was named the Unlimited Racing Group team’s new driver. Nilsen who has been driving in the Grand Prix World hydroplane class of hydroplanes the past few seasons replaces Tom Thompson (Cambridge, Maryland).

According to the rule book, Nilsen will have to re-qualify as a H1 Unlimited driver since he has sat out of the series for more than two years. A former professional baseball player and Central Washington University graduate, Nilsen will be required to make 15 laps on the 2-1/2 mile course, with ten of those laps over 130 m.p.h. and start a minimum two preliminary heat races on the outside. “Our team’s goals are to get me re-qualified and to get comfortable in the race boat,” Nilsen said. “We will slowly increase our performance as we go and despite having to re-qualify as a driver we will find a way to get in the final at Tri-Cities.”

This year, the U-440 “Bucket List Racing” team driven by Dustin Echols (Monroe, Wash.) have found speeds the boat previously had not achieved but have been a little beaten up as a result of those faster speeds. The faster speeds have caused increased stress on some of the mechanical parts causing some mechanical issues but the team has made the necessary fixes and has assured their fans they have the bright orange boat on the right track.

An unknown in the race will be Brian Perkins (North Bend, Wash.) in the brand new U-99.9 “Darrell Strong presents PayneWest Insurance.” Although Perkins is a veteran driver, he will be behind the wheel of boat that will be christened on Friday after ten years in development. The team sat out the first two races in order to prepare for the boat’s first race.

Also joining the fleet for their first race of the season is Jeff Bernard (Kent, Wash.) in the U-1918 “Oberto Super Salami.” Bernard’s hull is the former “Miss HomeStreet” and along with Shane’s boat, is operated by the Miss Madison Racing team owned by the City of Madison, Indiana.

Finally, the sport’s only WWII powered piston-powered hydroplane, U-3 “Griggs presents Ace Hardware” is sure to make a loud presence at the race with what is expected to be their only race of the season. Jimmy King (Memphis, Mich.), the oldest driver in the field at age 55-years-old is scheduled to drive.

Qualifying begins for the 54th annual HAPO Columbia Cup race on Friday, July 26, 2019 at 1:30 pm (PDT) followed by preliminary heats races on Saturday, July 27 and Sunday July 28. The winner-take-all HAPO Columbia Cup final race is scheduled for Sunday at 4:20 pm. Tickets can be purchased at WaterFollies.com.

H1 Unlimited hydroplanes are the fastest racing boats. With deep history, the 116 year-old sport ‘s majority of hydroplanes are powered by turbine-engines that produce 3,000 horsepower, allowing the H1 Unlimited hydroplanes to reach speeds of nearly 200 mph, producing a massive 60-foot tall, 300-foot long wall of water called a roostertail behind them. With very few restrictions, these majestic Hydroplanes race in front of shorelines and riverfronts packed with fans on bodies of water throughout the United States. For additional information on the 2019 H1 Unlimited Hydroplane Racing Series, visit the Series’ web site at www.H1Unlimited.com or download our H1 Unlimited app at your app store.