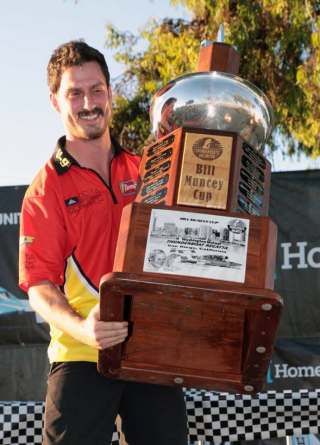 Andrew Tate hoists the Bill Muncey Cup during the awards ceremony at the 2018 HomeStreet Bank Bayfair.

The final for the 54th annual HomeStreet Bank San Diego Bayfair was won by Andrew Tate driving the U-9 Delta/Realtrac with five-lap final average speed of 143.605 mph on Mission Bay’s 2-1/2 mile racecourse.

It was an anticlimactic championship final that began when Jimmy Shane in the U-1 Miss HomeStreet never left the dock and failed to start. Shane had amassed the most points this weekend and was to have started in lane one.

Shane’s failure to started moved Tate to lane one where he battled several laps with Tom Thompson in the U-11 Reliable Diamond Tool presents J&D’s.

Brian Perkins driving the U-21 PayneWest Insurance went dead-in-the-water in turn two on lap one, making room for Tate and Thompson to battle deck-to-deck.

Dustin Echols driving the U-440 Bucket List Racing quickly fell back to avoid the spray of the two lead boats.

With the thousand of fans on the beaches on their feet cheering the two leaders, Thompson slowed to a stop in turn two after he lost a propeller blade, heavily damaging the back of his H1 Unlimited hydroplane.

Over the oohs-and-ahhs of the crowd with Thompson’s misfortunes, Echols quickly moved into a distance second behind Tate while Perkins restarted and moved into third.

At the end of five laps, Tate finished in first place followed by Echols and Perkins.

Tate said after, “A weird final to weird season pretty much sums it up.”

He continued, “It was actually pretty rough out there, surprisingly, then Brian went dead in corner unfortunately. He was up running in front of Tommy and me for a few laps mixing it up for us for a little bit.”

In a show of great sportsmanship, Tate’s team owner brought the ecstatic Echols one of their celebratory bottles of champagne for his team shower him.

After placing second, the best Echols and his team have every done, he said, “Pretty cool!”

“After the start of the race I kind of backed out of it when we started to get some of the saltwater in our engine and then one-by-one they started dropping and then Kelly (Stocklin) started yelling on the radio, ‘keep the engine going and keep the salt out of the motor.’”

In the end, Echols said he thinks the last couple laps were his fastest in the boat.

Tate said, “It was unfortunate that the guy who had the most points this weekend and was to be in lane one, Jimmy Shane didn’t go out. We want to beat them on the racecourse. It’s no fun for anyone when we are all not out there.”